We were awakened with a mighty bang at 2:30am. Drawers crashed open and we were nearly tossed out of bed. Someone in a nearby boat screamed. Everyone was awake so we turned on the lights to survey the damage and try to figure out what had caused the sudden jolt. All the drawers in the kitchen were open and a wine glass that had been sitting on the kitchen bench had been caught by one of the drawers as it slid open. So nothing broken. We can only assume that the tide had turned at the same time as a large container ship went past and the wake, coupled with the reversal of tide, caused the boat to buck a bit!!
Needless to say we didn't get too much sleep after that. Not a good way to start an epic journey across the channel!
Fortified with breakfast we started at about 10am to head towards France, first passing Margate and then Ramsgate as we headed towards the channel and the current that would eventually take us south near Dover.
We had recently installed AIS (Automatic Identification System is an automatic tracking system used on ships and by vessel traffic services for identifying and locating vessels by electronically exchanging data with other nearby ships, AIS base stations, and satellites) so we were able to identify other ships in the area through our GPS chart plotter and they were also able to see us. I had also installed an App on my iPad which allowed me to see all the ships in the area. Many have descriptions of length, weight, cargo, where they are going and where they have come from. Quite interesting really if you're not worried that one of these behemoths is directly in your planned route. It is even more scary at night time when it is difficult to judge the speed from just their lights. One boat had a draught of 19 meters and was carrying an incredibly heavy load of cargo so Dover Port Authority was warning other ships to allow it a clear passage. (our draught is only 0.76m) 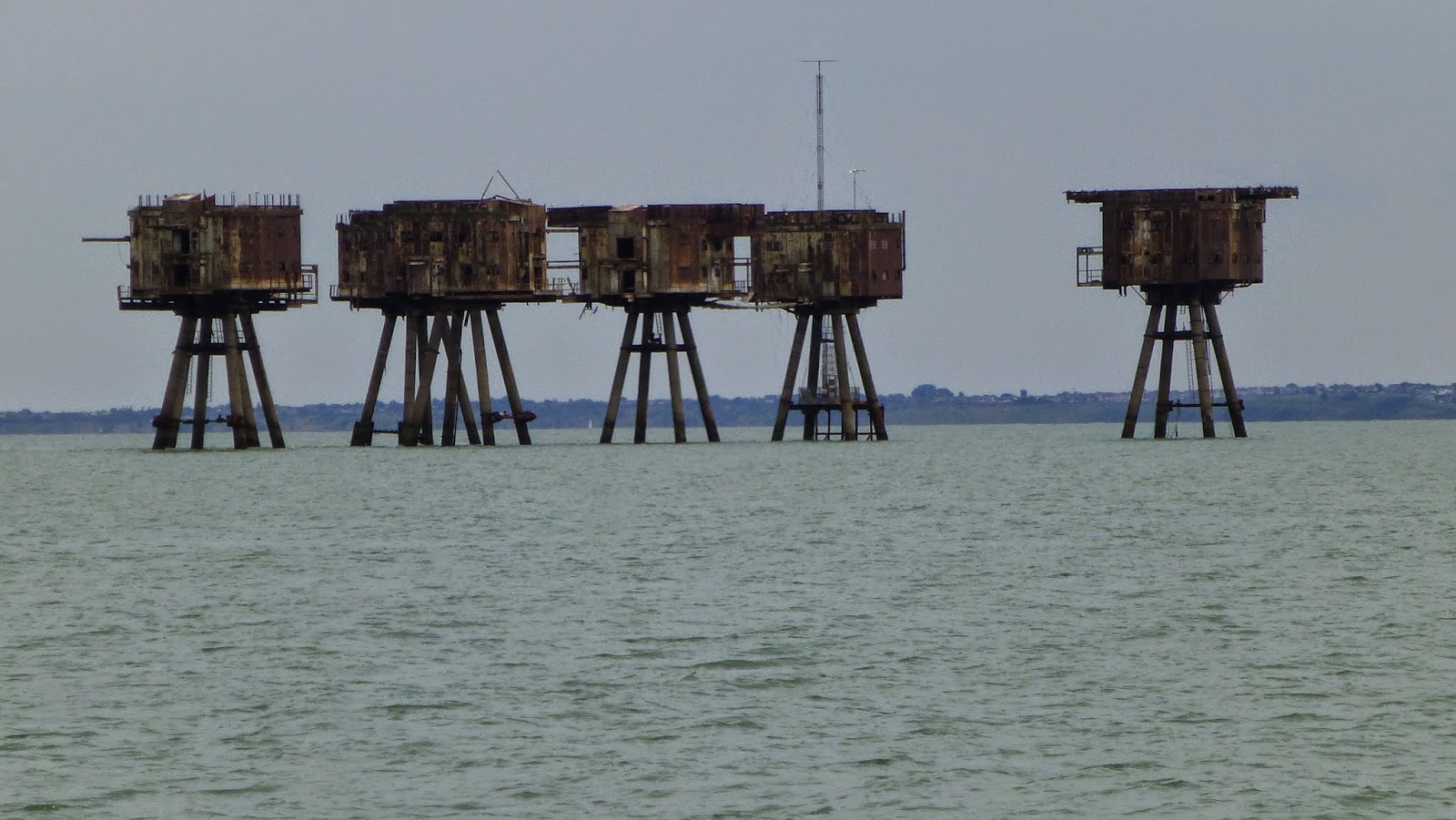 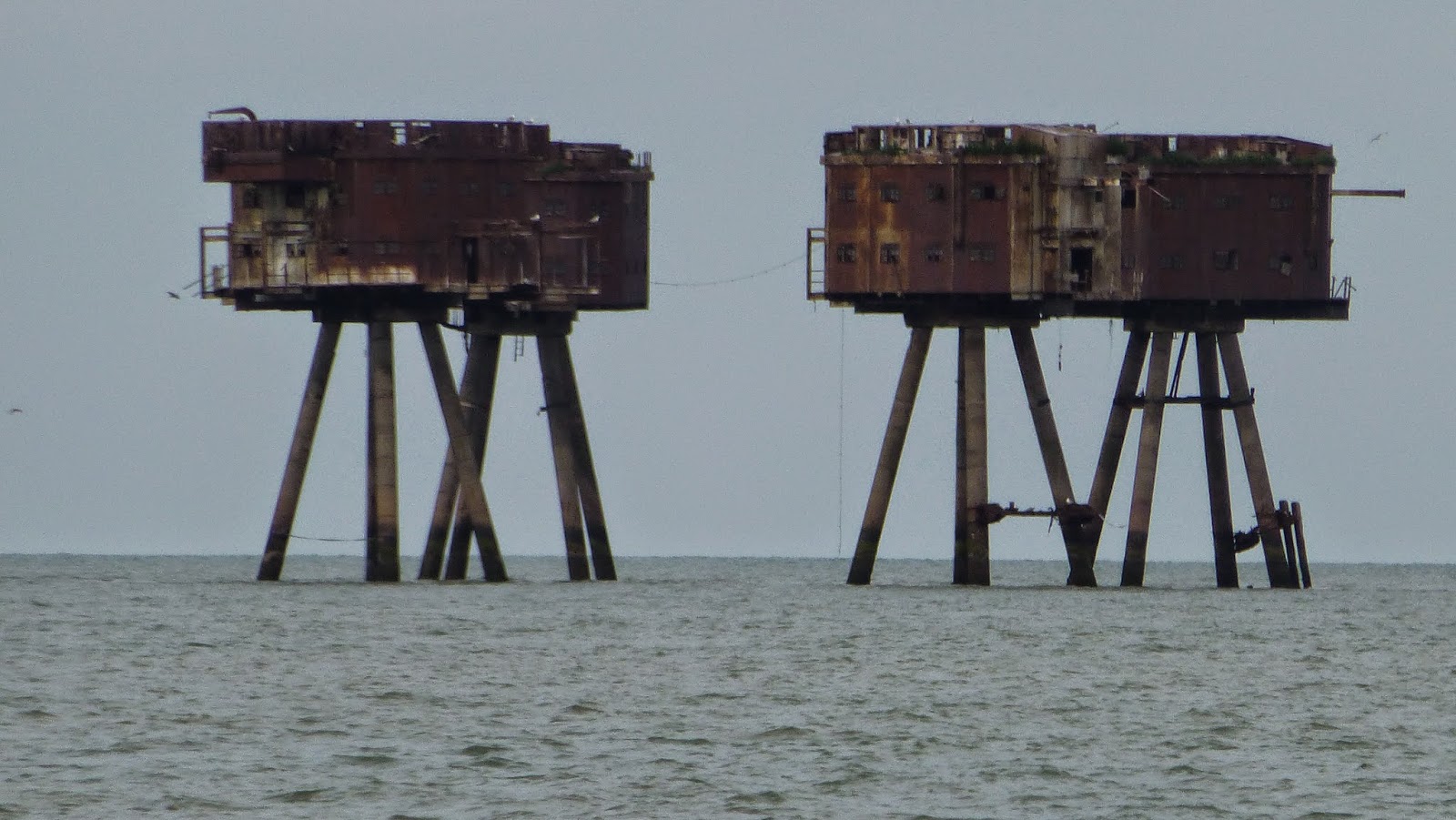 Apart from other ships there is not a lot to see on the trip across the channel although at the mouth of the Thames in the middle of the channel there are observation towers or forts  (called Maunsell forts after their designer) dating back to WWII. These were used to prevent German submarines from entering the Thames. Apparently one of these forts has been taken over by an eccentric gentleman and he has claimed sovereignty thereby, I suppose, evading paying UK taxes. Prior to this takeover it was used by one of the pirate radio stations that operated off the UK coast in the 60s.

Once we started heading south towards Dover we were also making our way east towards the English Channel shipping lanes. There are two lanes, one for ships heading north and the other for ships heading south. This, in theory, makes it easier for private vessels to cross as in each section you know that ships are only going one way. Once you reach the shipping lane you have to cross at right angles thereby ensuring you are in the shipping lane for the shortest period of time. Of course there are ships heading east west as well because most of the passenger liners going from England to France go straight across.
The water had actually been pretty smooth until we reached the shipping lanes and there was only a slight breeze. However, once we reached the shipping lanes the water was being churned up by the large cargo ships and tankers so it made travel a bit rocky. I went downstairs once and came back telling everyone that I wasn't going to be preparing dinner tonight  (sous chef Kevin stepped up to fill the gap - or should I say everyone's stomachs) and spent the rest of the journey in the wheelhouse where I could see the horizon and also looking at the AIS information on my iPad. Fortunately we had Internet for most of the journey. 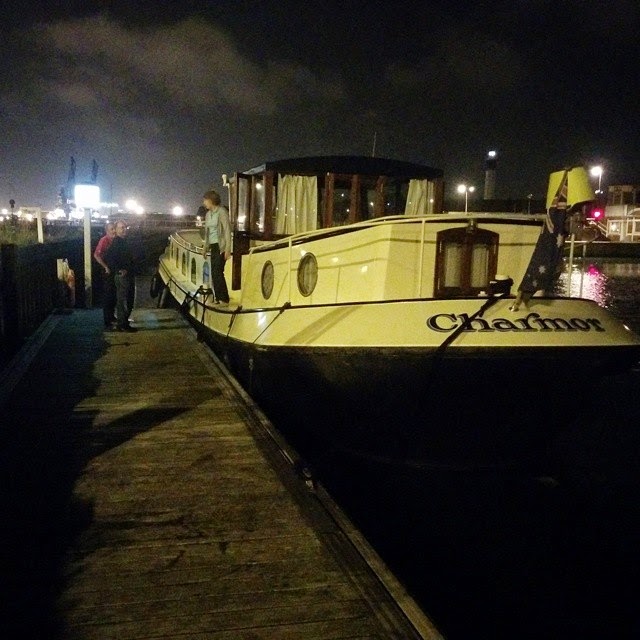 As we approached the French coast it was pretty close to 11.30pm and we heard over the radio that the bridge to the marina at Calais was going to be open in 10 minutes - perfect timing as  our pilot had planned the trip so that we would be able to enter the marina on high tide. After getting permission from the Calais port Authority to enter we approached the rotating bridge but had to wait as another craft was leaving the marina. As we dropped the revs of our motor, alarm bells started ringing and the temperature started to head towards boiling point. We had to keep going now as there was nowhere to stop and it wasn't long before we were tied up alongside the visitors mooring. Kevin couldn't believe that the engine had overheated at the last moment. We had been going at a steady speed of 1600 rpms for 14 hours with no indication that there was an issue but as soon as we dropped the revs back there seemed to be a problem. So glad this didn't happen in the dark in the middle of the English Channel!!
We tied up, had a glass of Bolinger champagne to celebrate finally arriving in France then went to bed as we were all mentally exhausted.
The next day we dutifully trotted upto the capitainerie's office to show our papers, passports etc. He only wanted our SSR registration and one passport and charged us a whopping €45 per night. We only stayed an extra night due to the worries about the overheating and then headed off down the Canal du Calais. No customs or immigration checkpoints. We were on the canals in France!