That is what the European markets are about. Buying food direct from the producer, in season, fresh and very tasty. You also get the opportunity to speak directly with the producer and get a feeling for the love they put into growing and producing their foods. These markets are varied - small open air markets in villages and hamlets sprawling through the streets or under cover in larger towns in designated market places. Some run every day, others in smaller towns once or twice a week. But wherever you are, you can always gain access to a market in a 20 km radius of your position usually any day of the week.
The smells and aromas are tantalising and stimulating. The smell of freshly baked baguettes or of poultry being rotisseried in the market place. The pungent aroma of cheese, the exotic smell of spices and preserved sausages and meats.  The hustle and bustle of the markets all add to the atmosphere. You see the locals catching up on their weekly gossip or just having a friendly chat with a local producer or rival stall holder. 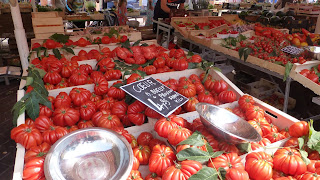 Knowing that the cherries were freshly picked from the tree this morning or that the strawberries or tomatoes actually taste as good as they look all add to the appeal of the market. When we were in France this time stone fruit were in season. The peaches and nectarines looked absolutely amazing and the smell was incredible - and they tasted as good as they looked - plump, juicy and mouthwateringly sweet. It's amazing how much better everything tastes when it is that fresh. The soils in Europe must be laden with nutrients - the foods aren't forced to size by being watered excessively. They are grown at their own pace with a concentration of flavour rarely experienced in food bought from supermarkets in Australia, although I have to admit that many fruit and vegetables brought from French supermarkets are still full of flavour and juiciness.
Not only are fruit, vegetables and small goods sold at markets but local craftspeople and artisans use this as an opportunity to showcase their talents. Flower markets also proliferate in the larger cities such as Paris and Nice. There are even special markets for "attic sales" which can divulge a treasure trove of goodies that have been hiding in peoples attics for years - maybe even centuries!!
During this holiday we visited markets in the Dordogne at St Cyprien and Sarlat. The Sarlat market is quite big and runs on Wednesdays and Saturdays, whereas St Cyprien holds it market on Sunday. As we were staying in St Cyprien it was fantastic to just be able to wander from our accommodation into the market and buy fresh fruit and vegetables and freshly cooked produce for our lunch and dinner.
In Narbonne, the market runs 4 days a week usually in Les Halles near the canal. There is a large range of fresh produce including seafood (see above) and several butcher's stalls as well. Nice old town has the market in Cours Saleya where it sells flowers, fruit and vegetables during the morning and then the area becomes a lively restaurant district for lunch and dinner. If you wander through the side streets of old Nice you come across shops that sell spices, cheeses etc. The aroma is amazing and the colour of the spices lends a real exotic feel to this part of Nice.
There are streets in Paris which are known as market streets. Living near one of these streets means you can go every day and cook and eat with only the freshest, tastiest  ingredients. Rue Cler in the 7th arrondissement and Rue Mouffetard in the 5th arrondissement are two examples. During the day dedicated boulangiers, patissiers, bouchiers, epiciers, chocolatiers ply their trade while in the evening the streets come alive with bars, bistros, brasseries, street entertainers. Just wandering down these streets in the evening you can absorb the atmosphere, knowing that for hundreds of years Paris locals have been coming here to purchase their culinary needs and to socialise.
Wherever you are in continental Europe, markets add that touch of authenticity that enlivens all the senses and tantalises the taste buds. If you don't do anything else while travelling make sure you at least sample fresh food in the markets.

Bruges has always been on my wish list of places to visit but recently people have suggested that Ghent is just as good, or even better, due to the fact that it is less crowded with tourists.
After visiting both I can certainly agree that Ghent is less busy and less "touristy" but it lacks that certain  "je ne sais quoi" that Bruges has. Maybe Ghent is more like a city and Bruges like a village but Bruges has a really nice feel and you could quickly become comfortable rambling around this UNESCO listed town. From what I have read the nightlife is better in Ghent but we are more interested in history and food so Brugge wins for us. And there is no denying that there are certain foods which must be enjoyed here - moules and frites and hot chocolate. There is also a plethora of chocolate shops - we LOVE Belgian dark chocolate.
In both places we stayed within walking distance of the main centre, but in Bruges everywhere, I think, is within walking distance! We really only felt that the central part of Ghent was of any interest.
Another similarity is that both places have canals which is another fascination for us with our interest in purchasing a Dutch barge. The canals are much more obvious in Bruges with the town circled by a canal - making it like an island - with various others crisscrossing throughout. In Ghent we only really saw the central canal making it appear more like a river similar to many other towns in Europe.
What we did experience in Ghent was the first of several organic food cafe/takeaway places. These shops showcase mainly organic freshly made food that looks colourful, appealing and tasty. These casual eating places are called EXKi and are scattered throughout Belgium, Italy and France. They are even at Charles de Gaulle airport. If you see one of these, try it. I am sure you will have a fantastic meal. The coffee's good as well.
Bruges is also close to the coast where there are many resorts to get away from any summer heat. Summer heat certainly wasn't evident when we were in Bruges but, even so, we did make the journey to to Zeebrugge and Blankenberge. Zeebrugge is mostly an international shipping port but we did manage to see this unusual ship lighthouse. Blankenberge is the typical seaside resort complete with casinos and lots of shops.These resorts are very European with areas cordoned off where you pay for the "luxury" of pitching an umbrella and sitting on a deck chair. At least the beach was sandy - not the pebbles we are so used to seeing on English beaches and the French riviera.
Now to the food. As I mentioned before, moules and frites (mussels and chips) can be bought in nearly all restaurants in Bruges and along the coast. The serves are enormous - we managed to eat one between the two of us for lunch and felt we had eaten enough. The mussels are really tasty, sweet and tender. The chips were tasty, crunchy and cooked to perfection. The other speciality is hot chocolate. This is really chocolate overload. What you get is a cup of hot milk and to that you add molten dark chocolate and stir till you get the desired "chocolatiness". If you really want to tip your cholesterol over the limit, they also give you whipped cream. And if that wasn't enough you get a bowl of various chocolates to eat with your cup of hot chocolate. Whew!! But it was soooo nice. 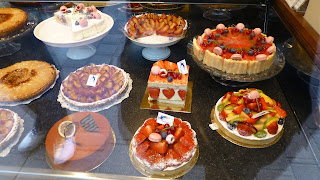 If you want a change from chocolate you can also indulge in the many decadent cream cakes that are on offer in the cafes. Just looking through the windows was enough to get the salivary glands working - they all tasted divine. This type of window shopping may be easier on the pocket but not so good for the waistline.