Once you get off the commercial waterways in Belgium there are some lovely rivers to cruise along. I have already written about the Leie with its graceful curves and it's lovely houses. The Dender is a more rural area, dotted with towns amidst very pretty countryside and farms. 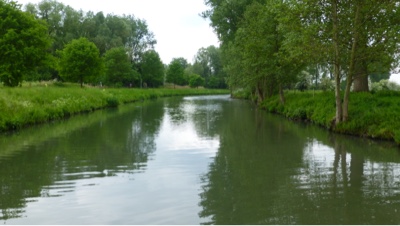 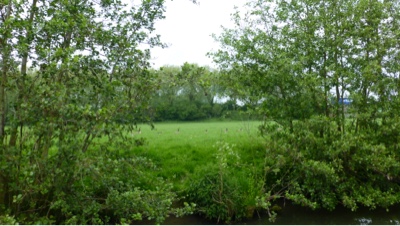 The locks are smaller as there is very little commercial activity and they are manned by teams who follow you along the river and open the locks and bridges. Many of them require muscle power so I'm glad they are doing the winding and hauling. To make it even more interesting many of the locks are combined with a road bridge mostly at the opening of the lock.  However there are a few that have the lifting bridge through the middle of the lock so we become a spectacle as the motorists or cyclists wait for us to exit the lock. Fortunately everyone one seems to be on rural time so they stand and chat and take photos while they wait.

We stayed one night in Ninove. As it was Pentecost long weekend there was a multicultural food festival in town. Locals were dressed very colourfully in the native country's costume while serving the food from their homeland. Countries represented were Morocco, Italy, Senegal, Brazil, Nigeria.
The next day we cruised to Geraardsbergen the home of the Mattentaart, a type of cheesecake filling made with buttermilk in a puff pastry case. This recipe dates back to the 1500s and the product has been listed as a region protected product. So if you want to give it a try then here is the recipe:

Bring the milk to a boil in a heavy pan. When it's boiling, add the buttermilk and stir well. The mixture will curdle as you stir.
Remove the pan from the heat and prepare a fine sieve by lining it with a linen dishtowel or double layer of cheesecloth. Place the sieve over a deep pot and pour the curd mixture through it. Allow to drain in a cool place for at least twelve hours. (Stir or loosen the curds occasionally if necessary to help them drain.)
When the curds have drained, separate the egg yolks from the egg whites. Whip the egg whites to stiff peaks. In a food processor, or with an electric beater, beat together the curds, egg yolks, almonds and sugar. Fold the egg whites carefullly and evenly into the mixture until completely incorporated.
Preheat the oven to 400F / 200C. Butter a cake pan / tin. Cut the puff pastry to fit: line the bottom of the tin with it. Add the egg / curd mixture. Place the second layer of puff pastry on top of the filling. Make several incisions on the upper pastry layer.
Put the tart in the preheated oven and bake at 400F / 200C for ten minutes. Reduce to a moderate heat (350F / 175C) and bake for a further fifteen minutes. Then raise the oven heat to 400F / 200C again for a final five minutes of baking.
Remove from oven and allow to cool before serving.
Ath was our next stop. Moorings in the centre of town are few and far between but as it was nearly the end of the day the lock crew said we could raft against another barge, effectively blocking off the canal from any other traffic. Chouette's owners were Mike and Sally who'd we had met at Flandria in Brugge.
The Grand Place in Ath was a five minute walk from our mooring so we took advantage of its proximity to have a local beer and then go back later for dinner. 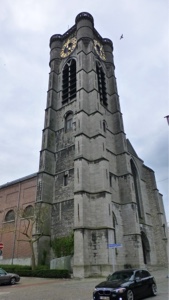 An interesting initiative near the main square was this potager garden. I'm not sure what happens to the fruit, vegetables and herbs when they are mature but I assume they are for the benefit of the townsfolk. 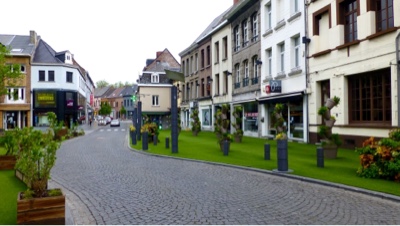 Ath was the last major town we were able to stop at on the Dender. This river then became a very scenic canal (Blaton-Ath Canal) with a series of 20 locks - 10 leading up to the summit and plateau and another 10 coming down to the town of Blaton and the commercial waterway of Nimy-Blaton-Peronnes. 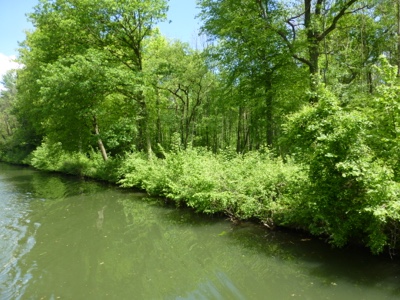 We had planned to spend a night at Blaton but unfortunately a water level sensor was malfunctioning so the overnight water levels could not be guaranteed by the eclusiers. We were informed it was too dangerous to stop so we exited the canal and headed east towards Pommeroeul, a known mooring spot where people do maintenance on their boats.