Three weeks after leaving Charleville Mezieres we are still sitting high and dry in a boat yard in Namur, Belgium. We had booked the boatyard before Christmas as we needed to paint the hull and do a few other maintenance items that could only be done out of the water, such as upgrading the bow thruster propeller. The yard in Belgium had been recommended by a few other barge people, and as we hadn't spent much time in Belgium we decided that a season up here would be interesting.

The trip on the Meuse is very scenic with some lovely towns along the way. As we got closer to Belgium the architecture also changed. The houses seem more charming than those of northern France but that could be because of the damage caused by the war and the lack of available building materials to repair or rebuild.
Before arriving in Belgium we stayed at Revin, where the captain of the marina was very helpful in recommending a lovely little family run restaurant " la Bonne Source". The food here was typically French but you could tell it was cooked with love. Nice little touches such as a palate cleansing sorbet doused in a liqueur that was a "house secret". The marina itself is in a lovely spot with a park and tennis courts next door and just a short walk from boulangerie, boucherie and 2 supermarkets. Over the bridge is the old part of Revin with a frontage on the other loop of the Meuse. The town was also very old with a number of timber framed houses.

Another town we stayed in was Givet. It was the first time since starting on the Canal des Ardennes that we had actually seen another boat going in the opposite direction. Moored up to the Quai was a small cruiser sporting an Australian flag. When we knocked on their door we discovered that they were also from Perth. Givet was another very pretty town with a citadel overlooking the river. We have found these to be more common as we head towards and into Belgium. These citadels are commonly castles surrounded by a large expanse of walls where they looked out over the river for marauders and where the villagers could seek refuge in the event of an attack. 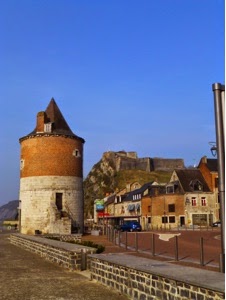 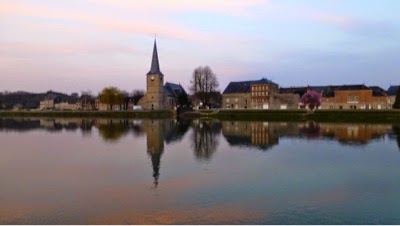 The next town on the Meuse, before Namur, was Dinant. While we didn't stop there it also gave us an idea of somewhere that we would like to stay next time we pass through. The bridge has a number of large saxophones in recognition of the fact that the inventor of the saxophone was born here. There is also another citadel. 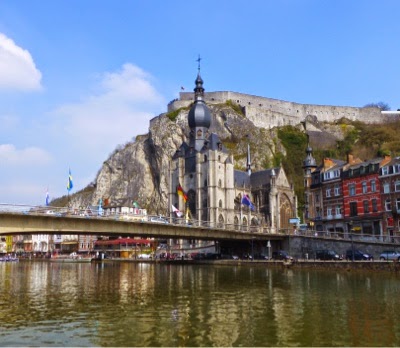 Namur is on the confluence of the Meuse and the Sambre rivers and  is the capital of Wallonia, one of the provinces of Belgium. They speak French here and many people speak English, so Kevin is feeling more comfortable here already. Apparently on the food front, Namur is noted for its escargots, mustard and, of course, chocolate. Who hasn't heard of Belgian chocolate!! While we haven't tried the escargot or mustard yet we have certainly sampled the chocolate and also the patisseries. They appear to be even more decadent and extensive than the French version. 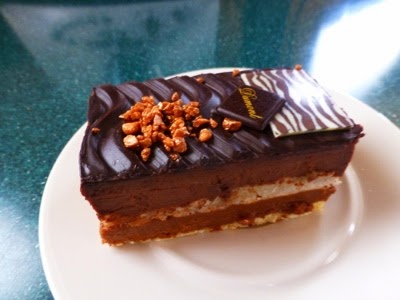 As we have been here for quite a while we have had the opportunity to see more of the town. The citadel here is very extensive and affords an amazing view of both the Meuse and Sambre rivers as well as Namur and its "suburb" of Jambes. 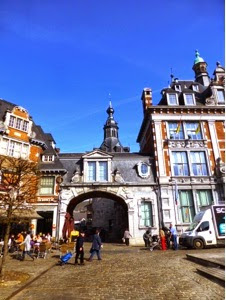 In the boatyard we are quite a walk out of town so haven't ventured to as many places as we would have liked. The supermarket is about a 3 km round trip which is fine on the way there but the return lugging heavy groceries isn't much fun. We have discovered a good Thai restaurant though. The Sawasdee is not in a touristy area but is always busy. The food is really good and the staff are very friendly. 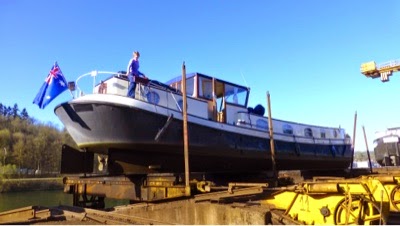 We are nearly ready to leave. Hopefully only a few days and we will be on our way. A nice shiny boat again. 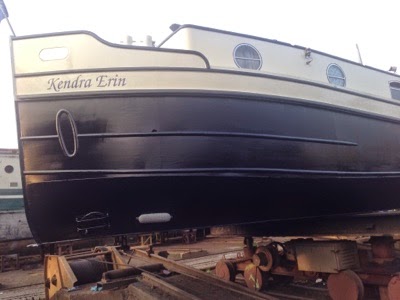 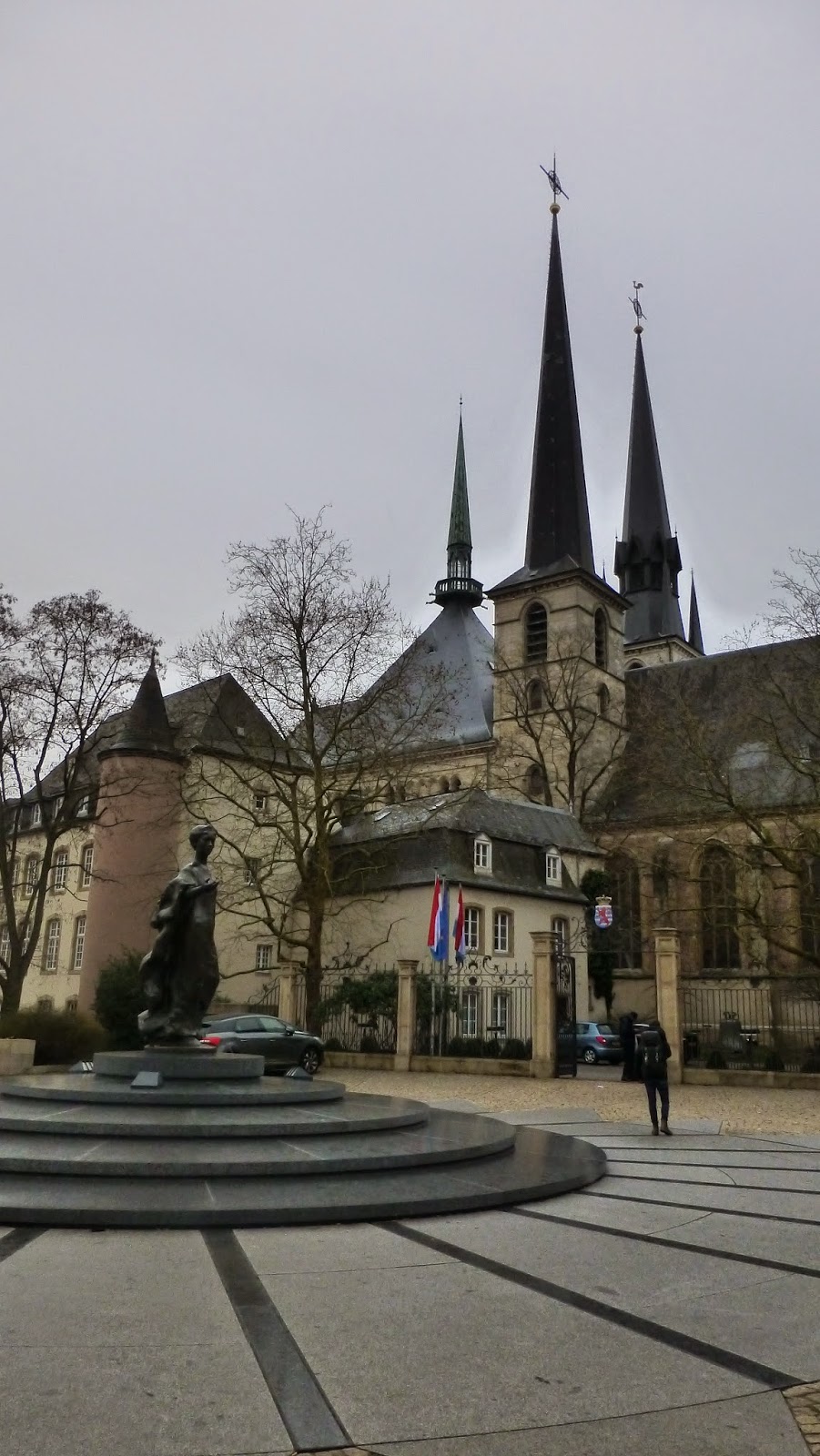 With Ryan arriving at Charleville Mezieres by car it gave us the opportunity to travel further afield. We decided to drive to Luxembourg as none of us had been there before.

Old Luxembourg City is a very beautiful place and the situation on a hill above the river is very picturesque. It's no wonder it is UNESCO a world heritage listed, mainly for its casements. 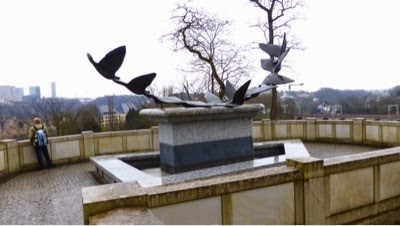 We also ventured back into the irrestible locale of Champagne. We just can't seem to get enough of both the towns and the drink. Once again Reims and Epernay were our towns of choice.

We seem to have a lot of luck with the markets on our travels. As a we were driving into Reims there was a local farmers market with the most amazing strawberries and a most amazing price. We ended up buying 2 cases for €5 but for €1 more could have had 3 cases. Each case had a kg of strawberries. Needless to say there are quite a few in the freezer waiting to be turned into sorbet in my Thermomix come the warmer days of summer.

When we arrived at Reims Cathedral the organ was playing but unfortunately by the time we entered they had finished playing. The light coming in through the windows illuminated the space beautifully with a beam of sunlight shining down on the lectern. 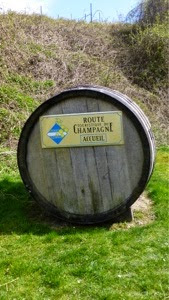 We did the Champagne route from Reims to Epernay passing through a multitude of champagne houses dotted throughout the countryside.

Unfortunately, being Sunday of the Easter weekend, not many were open but we did manage to get some champagne tasting at La Banque, a really nice restaurant in Epernay. As the name suggests the restaurant used to be a bank but now houses a restaurant and a champagne bar. A visit to the toilet is also quite interesting. You get to make a deposit of a different kind as the original use of the toilets was the bank's vault!

We then had coffee in a lovely little patisserie

After leaving Soissons we headed towards the Canal des Ardennes and a series of staircase locks. There are 27 locks covering a distance of a little over 9 kms and it can take about 7 hours to complete the set.
However, before we reached them we had the opportunity for a little peace and tranquility on the side of the canal. There was a lovely bankside mooring near the village of Variscourt.


Our next stop was Rethel, home of the boudin blanc, a meat sausage with no blood and mixed with cream. This is then cooked (boiled) for several hours. Once cooked it can then sliced and grilled to serve with eggs etc for breakfast or as a side on a charcuterie plate. After Rethel we travelled, on Saturday,  in drizzly rain to the small town of Attigney where we waited for finer weather to tackle the 27 locks. One of the lock keepers suggested we wait till the Monday as we should have finer weather by then. She also helped us in one of the locks so Kevin gave her some chocolate slice (always good to have a supply for helpful lock keepers) and she then followed us down the canal to ensure that everything was working properly.
Monday morning arrived and there wasn't any rain so we set off to tackle the staircase. After only 5.5 hours and a few halts due to lock malfunction and clogged engine filters we made it to the village of Le Chesne.
Believe it or not the following day was miserable so we decided to stay put for the day. We found a little restaurant in town that served a good home cooked meal then went across the square to the bar/tabac to avail ourselves of the free internet. The locals were playing a game of electronic darts so when they left we asked if we could play. The owner was only too happy for us to have a go and a few other locals joined in. It was a good night and it just shows that speaking a little French and understanding body language goes a long way to establishing a camaraderie. We also managed to jag another market in this town so stocked up on rotisseried chicken and roast potatoes for dinner with left overs for lunch on our travels.
Our final day on the canal des Ardennes saw us travel to Pont a Bar through some very picturesque countryside and then onto the Meuse. We finally reached Charleville Mezieres on Wednesday in time for Ryan to meet us. He was driving across from London to spend the Easter weekend with us. The journey on the Meuse was a lot quicker than the canals as we were heading downstream with quite a fast current so a speed of 12 or 13 kph was the norm whereas on the canals we were lucky to be doing 8kph and going upstream on the Oise we barely managed 4kph.