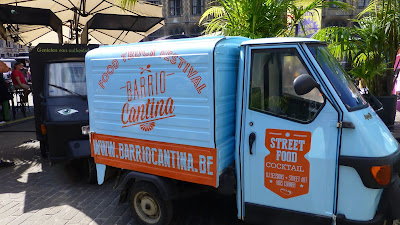 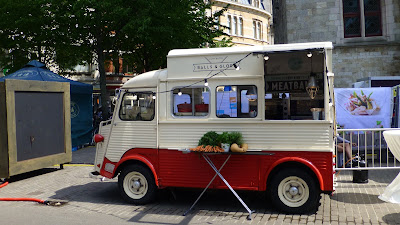 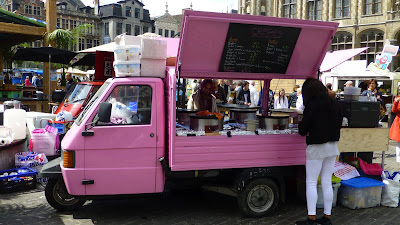 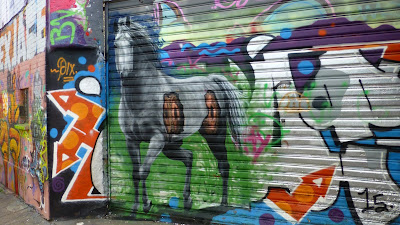 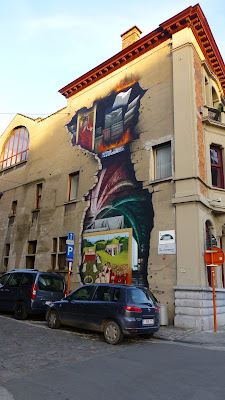 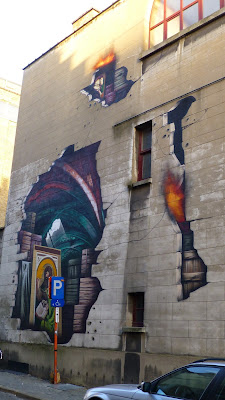 
Well we have made it to the beautiful, picturesque, historic town of Gent in Flanders. This town once consisted of 76 islands connected by waterways. While many of the waterways have been filled in to make way for houses and roads there are still enough canals and rivers to make this a unique town. We have decided to stay here for about a month before returning here to spend the winter. While here we are doing some minor renovations, such as painting our bedroom and changing the doors on the kitchen cupboards. Already painting out some of the wood has modernised the bedroom making it lighter and brighter.

Our trip from Charleroi on the Bruxelles-Charleroi Canal was a lot more picturesque than the cruise along the Sambre and there was the challenge of the incline plane at Ronquieres.


This is essentially a large bucket full of water that you cruise into and then you go down (or up) about 70m on a railway track. This system replaces the 14 locks that took most of the day and caused delays for the commercial barges. We stayed the night on the quay above the incline plane, so that we could prepare ourselves for the descent. While we were there there was a market below the incline plane, so we took advantage of the mooring and headed off to find some bargains. As well as the food items there was also a brocante where we managed to grab what we thought was a bargain - a Villeroy and Boch platter - for €15. When we got back to the boat I checked the Internet to find that it was worth about €100 so a pretty good find, I think. The actual trip on the plane was uneventful and as we were moored in a "bucket" it gave us the opportunity to actually enjoy the countryside as we were coming down the hill. Once down we moored up again and then strolled through the little village of Ronquieres and along the now dished old canal. Disused in respect that no-one sails along it but it is now home to a large number of permanent barges and a couple of B&B boats. 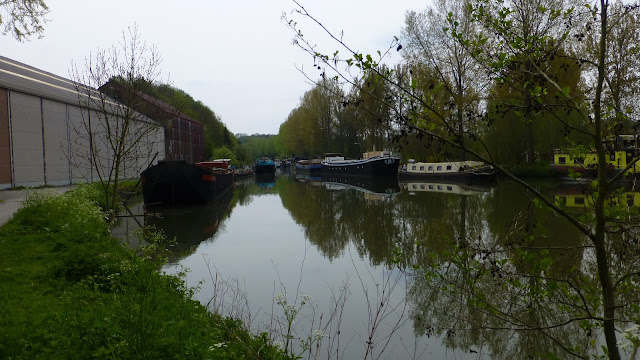 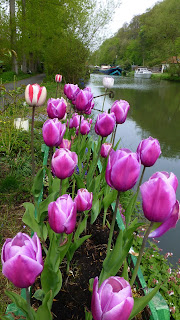 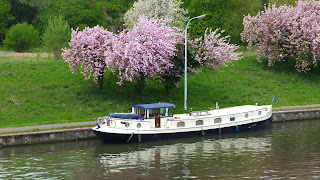 As you sail along there are also some very picturesque gardens and scenes, both on the side of the canals and also on some of the boats. These tulips were part of the garden of a permanent barge on the disused canal. There were also a number of flowering trees along the canals - definitely played havoc with the hay fever but as the petals are blown off the tree they make a colourful carpet on the canal. 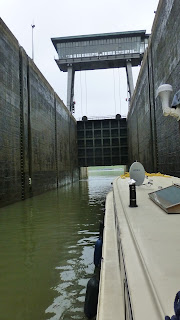 After leaving Ronquieres we were heading towards Brussels but before we got there we had to go into some rather deep locks - about 14m deep. Fortunately they had floating bollards but you still feel a bit like being in a watery coffin. Some of them have gates that go up in the air rather than sliding from side to side. When they go up they almost feel a little like the guillotine.
Just before reaching Brussels, you leave Wallonia, the French speaking part of Belgium and enter Flanders. Here they speak Flemish, a type of Dutch. It is really quite disconcerting to see signs on the side of the canal that you have no idea what they mean. Out comes google translate!! The strange thing about Belgium is that Brussels, even though it is in Flanders, the official language is French, and they reckon that within 10-15 years, due to the fact that The European Parliament is in Brussels, the official language will be English.
While in Brussels we stayed at the Royal Brussels Yacht Club, pretty posh sounding name but it was a reasonably priced port and quite convenient to the city with a tram running past the gates to the marina. We met a nice Belgian couple, Ivan and Vinciane, there on their boat Piper boat Tula. 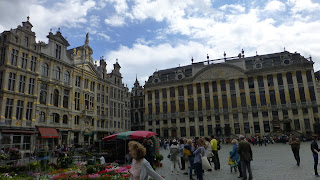 Brussels is not probably somewhere to stay longterm but we did enjoy the main square with its wealth of chocolate shops - much more touristy than Gent. 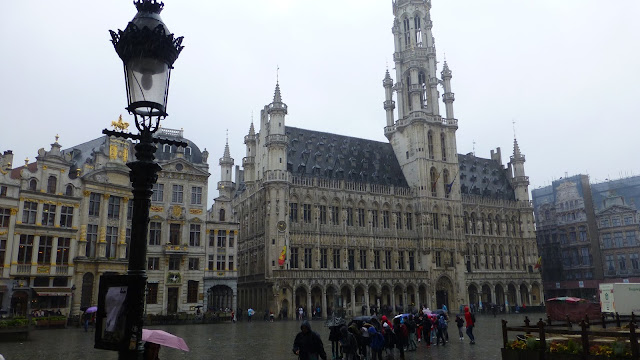 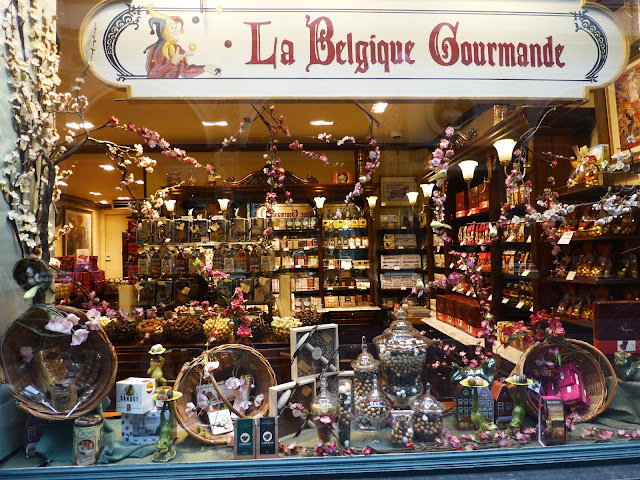 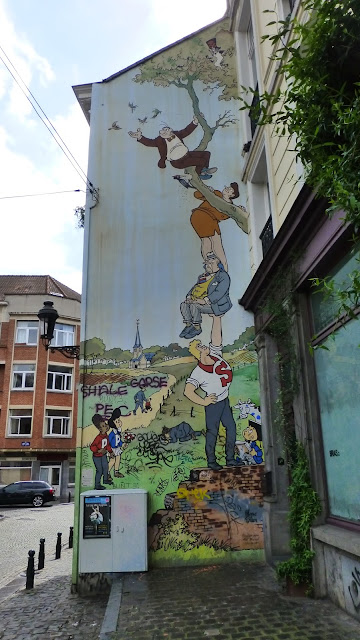 Brussels is also well known for its cartoonists. TinTin originated here as did those blue characters - the Smurfs. There are a number of street cartoons depicting various famous cartoonists. 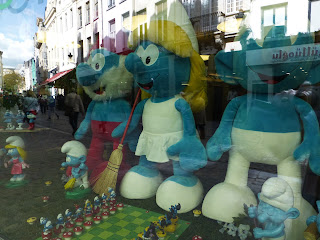 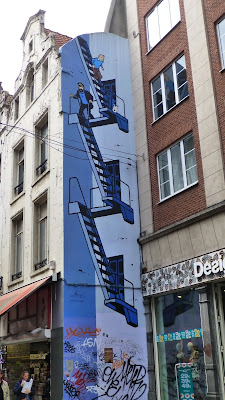 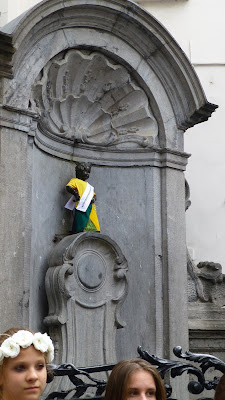 Not quite sure why but Brussels other claim to fame is the Mannequin Pis. This small statue of a boy peeing is the most photographed tourist attraction. Apparently people send clothes to Brussels for the statue to wear. There is even a section in the textile museum of all the different clothes that the statue has been dressed in. 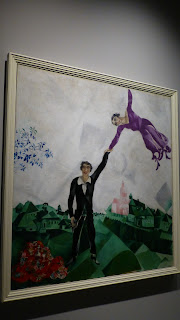 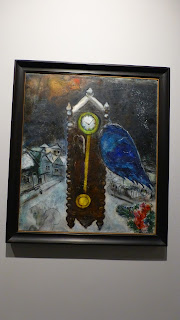 Also while we were in Brussels we went to a Marc Chagall exhibition at the Brussels Art Gallery. A lot of his paintings depicted scenes alluding to his Jewish ancestry and also depicted some of his darker moods as he battled with depression. He designed a stained glass window in Reims Cathedral. He was also responsible for painting the ceiling of the Opera Garner in Paris. 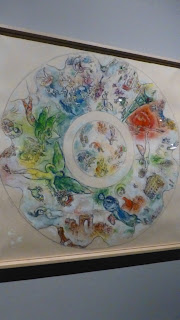 Gent was our next destination. To reach here we had to travel down the tidal Schelde River. To make this an easier exercise it is best to go with the tide. We had originally planned to sail with the afternoon tide and overnight at a ferry pontoon but after a relatively sleeplessness night we decided to try and catch the early tide. With a 7am departure we reached the river just as the tidal flow was peaking and managed to "ride" the tide all the way to the lock at Gent. There were times when we were doing 14kph.