After waxing lyrical about how great the scenery and architecture is in Belgium compared to Northern France, we left the Meuse and cruised up the Sambre. What a contrast! Gone were the lovely scenes of green fields and trees and picturesque villages, only to be replaced by vast industrial estates, most of them revolving around recycling. From compressing car bodies into relatively small cubes of steel to mounds of crushed glass and mashed up plastic. Not pretty sights and the overflow into the river means it isn't as clean as the Meuse either. The culmination of this was the town of Charleroi. While the main part may have been a typical city with shops, banks, boutiques etc, the view from the river was rusting steel works and silos. And lots of them.

There were a few bright lights such as the town of Auvelais where we stayed one night. The spot on the banks of the Sambre seemed peaceful enough until we noticed that directly behind us was a train line. With trains running all through the night we didn't really get a restful sleep but the people in the town were friendly enough and it had all the amenities we needed. 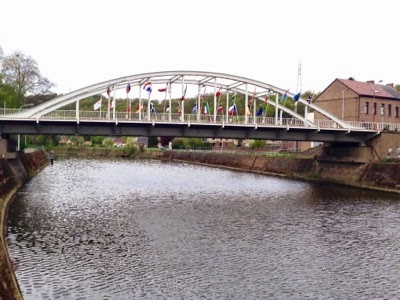 We have noticed many towns along the rivers in Belgium have a multitude of flags on their bridges. We're not sure whether this is an indication of the nationalities in the town or just a way of recognising other countries in the EU.
Posted by shell007 at 1:46 AM No comments: