Strasbourg - The crossroads of Europe

Strasbourg, in the Alsace region, is our winter destination for 2016. It is a city of contrasts. On the one hand you have the European capital with its very modern parliamentary buildings and on the other you have the Middle Ages historic centre with its colourful half timbered houses and German heritage. While there are many tourists in the centre of Strasbourg looking at the all the lovely sites, there is also a good mix of younger people. Strasbourg has the second largest university in France and so there are areas where the vibe is much younger with an eclectic mix of nationalities. Of course there are also the international expats who live here because of the European Parliament. This means that there are many different types of restaurants and foods to choose from when eating out and also available from the supermarkets. There are even Asian supermarkets to source such things as Thai curry paste and shaoxing cooking wine.

We have settled in quite well to our marina which is about a 20 minute walk from the centre of Strasbourg or a 10 minute tram ride.
On the weekend we had our first social event here at the marina. It was a great night with lots of wine and cremant flowing as well as generous amounts of food, including  a lamb on a spit. A live band was also playing. We have come across this type of entertainment frequently during the summer in France and are constantly surprised at how good the musicians are and also that most of them are our age or older. Needless to say the usual marina rule of no noise after 10:30 didn't apply this time as the band was still playing at midnight.

Strasbourg occupies a very strategic position on the eastern part of France and over the centuries has at times alternated between being a German state and then a French state. This shows in the architecture, food, language. For us it also means that we are able to hop across the border and be in Germany for lunch or do to a spot of shopping. Food and electrical goods are generally cheaper in Germany than France so we get to cherry pick where we want to shop for the best variety and price.
Also now that we have a car we can travel further afield and be in Switzerland, Austria or Italy in a few hours.
"Old"Strasbourg is  lovely with some very attractive and colourful medieval half timbered houses. 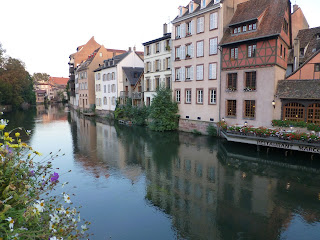 The area of Petite France is especially pretty but its history wasn't quite so sweet. In the medieval times it was the tannery area of Strasbourg. It was ideal as it is entirely surrounded by water so the tanners could easily wash the hides and also, as it was not in the direction of the prevailing wind, any nasty smells didn't get blown into the main areas of Strasbourg.
We had heard that there was a free walking tour of the city so we decided to take advantage of this to see if we could learn any interesting tidbits about Strasbourg that you wouldn't read in a book. Here are a couple of little known facts: 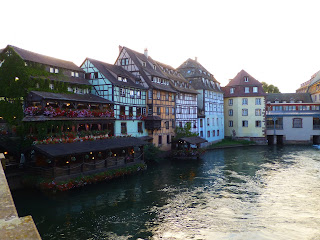 1) The wooden medieval houses are actually demountable and transportable! They were built in such a way that the wooden supports were all numbered by the carpenters and the bits in between the wooden supports were only filled with "temporary" products thus enabling them to be shifted elsewhere. This could occur if the ground became unsuitable or if development meant that the area was needed for another purpose other than residential.
2) Since 1914 Strasbourg has changed nationalities 5 times. At the end of WWII they were allowed to decide whether to be German or French. They chose French because, through history, when they were under French rule they felt that they were given more freedom and choice. 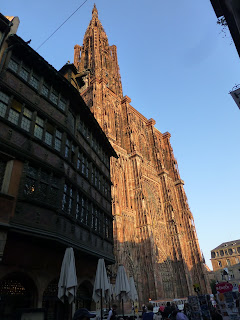 3) The cathedral was built over a period of 200 years and had numerous architects who changed the plans as they went so it is easy to see different styles of architecture on the facade of the cathedral. When the plans were first drawn Strasbourg Cathedral would have been the tallest building in Europe. However, by the time construction was nearly finished it was no longer so.  Therefore the last architect decided to add the tower that we see today, but because the foundations weren't built to take such a weight it was decided that only one tower would be built - hence the reason the cathedral is asymmetric.
4) In the square in front of the cathedral is a post attached to the corner of a shop. Apparently the space between the post and the building is significant. The town councillors, after a meeting, would walk around the town and visit the homes of many local people where they would be offered food and wine. At the end of the day if they could no longer fit through the gap between the pole and the building they were sacked because it appeared that they were more interested in eating and drinking than listening to the woes of their constituents !! Also if a pregnant lady could no longer fit between the gap she had to go home immediately because it was thought the baby would be arriving soon!
Posted by shell007 at 9:16 PM