After a very leisurely cruise from Vic-sur-Aisne, we arrived at the town of Soissons. Since leaving L'Isle Adam we had stayed at Pont-Ste-Maxence, Compiegne and Vic-sur-Aisne. We started on the Oise and after leaving Compiegne we took a right and headed down the Aisne.


Compiegne is a lovely old town filled with lots of historic sites and has a place in history right up to WWII. The armistice of WWI was signed near Compiegne and when Hitler overran France during WWII he forced the French to sign a surrender at the same place that the armistice was signed. Compiegne also has a history with Joan of Arc. She left Compiegne with her army to fight the Burgundians but as the battle was turning and the army returned back to the walled city of Compiegne, the mayor of Compiegne decided to shut the gates before Joan of Arc could get through. She was captured by the Burgundians who then sold her to the English. On the day of the battle she went into St Jacques to pray

There is also the Imperial Palace built by Louis XVI and then added to by both Napoleon I and III. They used this to entertain heads of state.

Vic-sur-Aisne is a small town but with a lovely moated chateau. We were fortunate that it was market day so we were able to stock up on fresh produce for lunch and dinner.

Soissons is reputedly one of the oldest towns in France and has a history dating back to Roman times. However, Soissons was hit very hard during WWI and many monuments were damaged. Evidence can still be seen on the cathedral walls of bullets and other damage. The Cathedral survived The French Revolution and WWI but the Abbey was not so lucky. 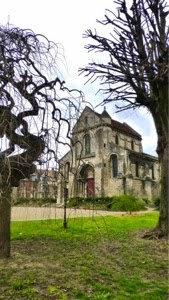