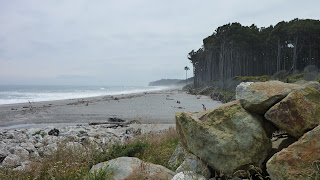 The West coast of New Zealand's South Island is very wild and rugged. Bordered by the Tasman Sea and the Southern Alps, this area averages an inch of rain a day. This means rain forests, raging rivers swollen by melting snows, fiords and glaciers - amounting to some amazing scenery and incredible photos - like this one of the rain forest meeting the sea. 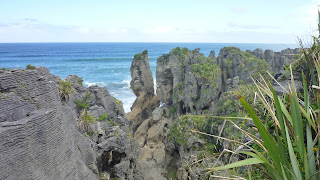 The northwestern corner of the South Island is particularly rugged and has some amazing rock formations such as the Pancake rocks, part of the Paparoa National Park near Punakaiki, also making it an ideal habitat for penguins and seal colonies. This area of New Zealand was also known for it's gold mining history around Ross and Greymouth, and in more recent days, unfortunately, for some mining disasters, most notably at Pike River. 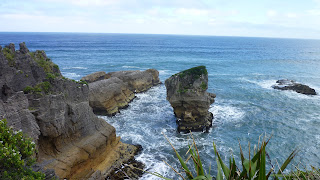 As we drove towards Westport, our destination for the day, the roads became increasingly windy and the wind stronger. With names like Cape Foulwind I don't suppose we could expect much else! We were on the hunt for food and a decent cup of coffee but so far, hadn't found anything promising. So we continued to drive into Westport.
Westport's main street reminded us of the Wild West - in America! The clapboard style houses and shops were very reminiscent of a Wild West town. When you took into account the wind blowing down the street we wouldn't have been in the least surprised to find tumbleweeds rolling past.
Anyway to that cup of coffee. Westport isn't terribly large so we were almost at the end of the main street and hadn't seen anything that looked like it served a decent cup of coffee when we spied a restaurant that appeared promising, judging by the number of cars outside. The Town House, which we were later to find out, had recently relocated with a name change (from the award winning Bay House at Cape Foulwind) and was already getting quite a reputation as a great place to eat. It was a combination of good food, coffee and a relaxing ambience where you didn't feel out of place if you wanted to read the paper. It was pretty late for lunch but they still offered us the Brunch - Kevin having the Town House breakfast of chorizo, sausages, bacon, eggs, onion jam and aioli and I had the more modest but very tasty mushrooms on toast - both the food and coffee were fantastic - what a find. 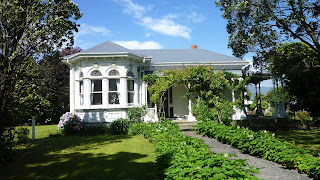 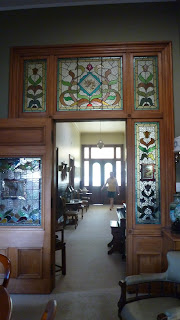 Next we needed to find somewhere to stay. The tourist bureau seemed the best place to start and being a Monday night of a long weekend we were pretty optimistic that there would be lots of choices.  Their first suggestion (once they determined our preferences) was a gem. When we arrived at Archer House we were impressed by the lovely old house and the magnificent gardens. Set on half an acre, they often hold weddings in the gardens. We were even more impressed when we walked inside. Our hosts, Jackie and Charles, informed us that so far we were the only guests for the night and, as such, could choose our room - would we go for the opulent red room, the leadlight lit green room or the relaxing blue room? The blue room won out for its spaciousness and lovely aspect onto both the side and front gardens. All ensuite bathrooms were ultramodern. We were then shown the study, the TV/lounge room, the kitchen and the conservatory - all of which we had free rein. Our hosts then told us they had recently had a Prince of a South Seas Island staying with them and, given the service and quality of the fittings, we could certainly understand why. We were asked our preference for wine, given some snacks to have with our drinks and also use of the washing machine. They then said they would return in the morning to make us breakfast. We had this totally amazing house with its many antiques and artworks all to ourselves for the night. Wow!!
That night we ate at the Deniston Dog - not the best restaurant we have eaten at but the food was reasonable and they served the New Zealand classic of Whitebait patties. Unfortunately, because it was a public holiday, they had severely underestimated the number of staff they needed so the service was really slow. They did apologise profusely for this and it helped fill in the night.
While this part of New Zealand may not be on many people's wish list it does provide an opportunity for nature and eco tourism away from all the hype of adventure tourism for which New Zealand is noted.
Posted by shell007 at 10:10 AM