Tuscany - Off the Beaten Track 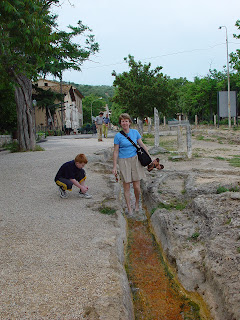 A journey to Tuscany isn’t complete unless you visit well known towns such as Florence, Lucca, Siena, San Gimignano, Montecatini, Montalcino to name but a few. However it is often the smaller, less well known villages that remain in your memory – the highlight of an unforgettable trip to .
Travelling around in a car you quite often manage to stumble across a little gem of a village that isn’t mentioned in any of the glossy tour brochures and sometimes barely rates a mention on road maps. Bagno Vignoni in , east of Montalcino, was one of these villages. Small and unprepossessing on first glance, it surprised us with its thermal waters and friendly residents (apparently the total population is 36!).
As we drove up we noticed people wading in channels of water. On closer examination we noticed steam arising from them. These channels were the overflow from the hot spring in the centre of town where the water temperature is 52°C. One by one we took off our shoes and dipped our feet in the very warm water. It was almost a surreal experience to be wading in bath temperature water in irrigation channels carved out of the limestone embedded ground.
The thermal waters of this village were first known by the Etruscans and then by the Romans who built the village square, closed in on 3 sides by town walls about one a half metres high, into baths. The Romans consecrated these waters to the Nymphs. From the 12th century and throughout the 13th century, Bagno Vignoni became a stopover point for Christian pilgrims travelling from Northern Italy on their way to . Around this “square” there are buildings designed by Bernardo Rossellino in Pope Pio II’s honour. Legend also has it that Saint Catherine of stopped here. 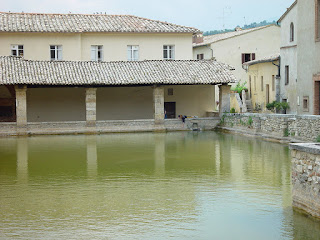 Around this square of water are a few shops selling typically Tuscan fare and also a tavern with a very friendly host who expounded the virtues of his red wine over the more famous Brunello of Montalcino. While our experience of Italian wines was minimal and those we had tasted were “weaker” than our Australian wines our host showed his knowledge of his wine and our tastes by choosing a full bodied red that, while relatively expensive, was very good. During our visit we elicited that he and his French fiancé had worked on an Australian vineyard so were very familiar with Aussie tastes.
On another foray into the Tuscan countryside we visited Volterra. While this is a better known village than Bagno Vignoni it was still a treat to visit as there were fewer tourists and therefore a more authentic feel to the town. Volterra is west of San Gimignano and can be reached by a scenic and very windy road. Views across to the coast are spectacular. Originally it was founded by the Etruscans as one of twelve cities of the Etruscan Confederation and they constructed a town wall nearly seven kms long. A significant proportion of this wall still stands although it was replaced by a shorter medieval wall in the 12th century. Its population of 25,000 had a brisk trade in metal, timber, wheat and alabaster. Roman rule was evident from about 300BC and an amphitheatre was built about the 1st century BC. Roman baths were also built n 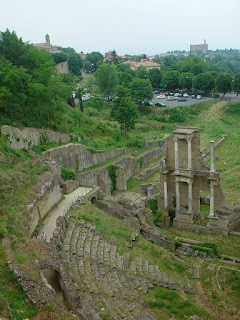 earby but probably after the decline of the amphitheatre. Volterra had its share of ups and downs over the centuries due to wars with and varying markets for its produce of grain and alabaster. Today it is an industrial, agricultural and tourist centre with many alabaster workshops.
A wander around the streets evokes strong emotions as there are many reminders of all its inhabitants in the architecture of the town although it has a decidedly Medieval feel. More detailed information can be found in the museums, such as Museo Etrusco Guarnacci. The highlight for
us was the amphitheatre where it was easy to imagine actors playing to their Roman audiences. We also indulged in some alabaster eggs and I have to admit to not being able to leave without buying a stunning glass dish.
Living in it is hard to imagine buildings and sculptures that have survived for thousands of years yet these are so common in Europe, particularly in this part of . Being able to visit magnificent examples such as in Volterra without the hordes of crowds that one comes to expect from travelling throughout is a real treat. I can’t wait to pack up my suitcase and make the journey back to and its incredible history again.
Posted by shell007 at 9:15 PM