West of Bordeaux and bordered by the ocean and the Garonne river estuary is the area known as the Medoc. This area grows grapes that supposedly make some of the best wine in the Bordeaux wine region, if not the world. And it attracts some pretty impressive prices as well.
The best time to visit this region is mid to late summer but we were here in March so the area looked a bit windswept and bare.
The soil here looks a lot poorer that the hills around St Emilion but they always say “the poorer the soil, the better the grape”
Certainly the prices that some of the wines sell for attest to that, as does the names of some of the labels – Lafitte Rothschild, Mouton Rothschild and Chateau Margaux just to name a few. The chateaux here are also impressive compared to other wine growing regions but not on a par with the chateaux of the Loire region. 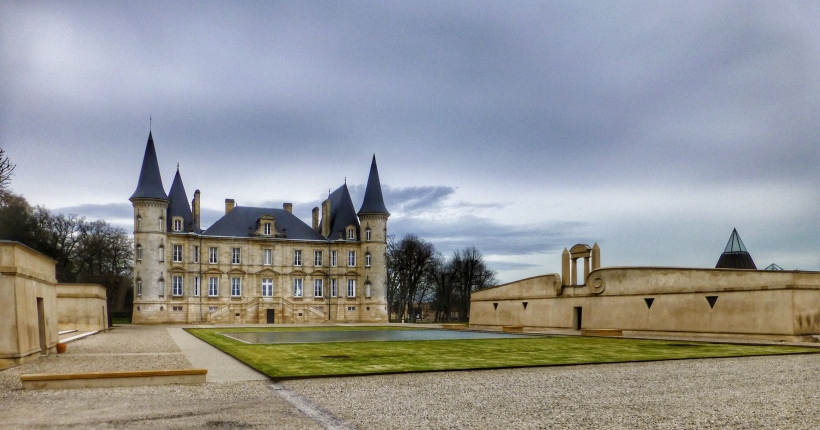 The riverside town of Paulliac is the centre of this region and, during summer, attracts many visitors to its riverside brasseries and wine caves (cellars). There is also a port on this tidal estuary.
This area was also important during the Second World War with the Germans establishing a base near here to try and control a sea port on the south western part of Europe. Many winemakers hid their wines in very inventive ways to stop the Germans pillaging their prestigious wines. Some interesting stories have been told about this area and other well known French winemaking areas in the book Wine and War by Don and Petie Kladstrup
Posted by shell007 at 2:17 PM No comments:

side trips from Avignon


Our first little village was Roussillon. This village is named for its red ochre houses and it has the largest deposits of ochre in Europe. It is a very picturesque place much loved by many artists but not quite as touristy as it's neighbour of Gordes. We thought Roussillon was much nicer than Gordes, which is probably best viewed from the road leading into it. Gordes was pretty much a dying town until the mids 1960s when someone decided to rejuvenate it and make it a tourist destination. It seems to have worked well with a number of first class boutique hotels and restaurants.
Les Baux de Provence was another town on our list, also very touristy, with its popular hill top medieval chateau and a collection of medieval war machines such as trebuchets and battering rams. During the height of the summer, medieval festivals, jousting and demonstrations of medieval crafts take place. What we really came to see was the Carrieres Des Lumieres.  The old quarries beneath Les Baux have been converted to a sound and light show, showcasing works by various artists. This year Pablo Picasso was the featured artist. I would highly recommend this even if you don't walk up to the top of Les Baux to the chateau.


Another highly recommended village is Uzes. Many people see this village in combination with the Pont du Gard but as we had visited this Roman site on a couple of other occasions, we decided to just head into Uzes. What a charming town. It is bigger than some of the other villages and has the more refined feel of a prosperous market town, with lovely shady treelined streets, interesting  shops, lively market square and busy restaurants. We started with coffee and cake in a small but busy one woman run cafe then wandered around the old town and up into the newer part before heading into the market square in search of lunch. The market was in full flow and the restaurants were busy with good menu du jour options. Some people make a trip to Uzes because of their love of confectionary. The Haribo museum and factory is on the outskirts but we managed to control ourselves and drove straight past!

After lunch we drove to the colourful village of St Quentin La Poterie, so named because of the clay soil and hence all the potteries.

From St Quentin we made our way back down to the Rhone river catchment area and the town of Tavel. This wine appellation area is renewed for its rose which can combine as many as nine different varieties of grape. The colour of the wine can range from a very pale pink to a deep russet colour depending on the combination of varieties. The tastings were generous and the staff very informative about the different appellations. They even had a wine which was grown of the same soil type as chateauneuf du Pape but without the name on the bottle and without the price tag.

Our last small village to visit on our stay in Avignon was Menerbes. This was a favourite spot with many impressionist artists but became more well known when author Peter Mayle wrote about his experiences in "A Year in Provence". Originally we were supposed to be going to the antique market in Isle our la Sorgue, but it was impossible to get a parking space so we went to plan B. We had a lovely lunch in Menerbes with fellow bargees, Mike and Gloria, and then had a wander around the town, only to be caught in a sudden thunderstorm. After seeking refuge in a small gallery we then continued our walk only to find that the storm hadn't finished drenching us. This time we managed to find a truffle shop, restaurant and information centre.

The Saône and Rhone rivers had abated and so it was in the third week of April that we decided to head off on our cruise south. The speed of the rivers and lack of moorings for boats our size meant that we put in long days with few stops.


We did manage to get into Valence marina which was a welcome stop as it was only a short distance to a supermarket, enabling us to restock the fridge and pantry.


From Valence we expected that we would need to moor at the end of a lock as there appeared to be no moorings between there and Avignon. So for one night we perched on the pontoon at Bollene lock with a yacht rafted to us. As commercial boats run all night on the Rhone, it wasn’t exactly a restful sleep.


With no plans to stop for any length of time on the Rhône River we tried contacting the marina at Aramon to book a night’s stay but no one returned our calls.  Rather than get there and find nothing available we contacted the Port de Plaisance in Avignon and they said they could accommodate us. What a fortuitous decision! We liked Avignon so much that we decided to bring the car to the marina and ended up staying a month.
We had plenty of opportunities to wander around Avignon, exploring places that we may have missed in a short stay and to try out a few restaurants. There are three we can recommend: la Fourchette, on Rue Racine behind the Theatre; Le Carré du Palais, on the Place Palais du Papes, and Le Vintage on Rue Galante. All have different styles of presentation, at different price points but with great food and service.

Side trips from Pont De Vaux

It's the middle of April and we have only just arrived at the boat in its winter mooring at a Pont de Vaux. We have started cruising later this year because the weather has been pretty cold, with lots of rain. As we will be cruising on the Saône and Rhone and both have been in flood, we have had to wait till both of them are at reasonable levels and speed.
While in Pont de Vaux, we have taken advantage of having the car to do a few trips out into the countryside. We had heard that the market in Louhans was very big and it was a typical farmers market. Normally that means lots of fresh fruit and vegetables and artisan products. But this was literally a farmers market, with small animals for sale as well. While most of the livestock was poultry there were a few lambs, kids and a number of rabbits and hares. The famous Bresse chicken was also being sold by a number of stalls - not exactly the cheapest but James Martin, the chef from UKs Saturday Kitchen, says the extra price is worth it. We will take his word for it!

Louhans itself is a typical medieval village and being in Burgundy has a lovely tiled roof on the church.
After wandering around the market we then drove to Cuisery. The high street of this town was dying so some local volunteers decided to market the town as a centre for books, where such crafts as printing, bookbinding and restoration of books could be carried out in the empty shops. They also have a book market once a month. It was a Monday when we visited and the town still didn't look very prosperous but, typically, a lot of shops shut on Mondays.
We had grabbed some food from the market in Louhans so scrabbled together lunch to eat on the banks of the Seille river.
We also visited Cluny in southern Burgundy, a well known pilgrimage town and an equestrian centre. Cluny has grown up around its Benedictine abbey founded by Duke William I of Aquitaine in 910. The height of the abbey's influence was from the second half of the 10th century through the early 12th. The abbey was sacked by the Huguenots in 1562, and many of its valuable manuscripts were destroyed or removed. Then after the French Revolution many of its buildings were dismantled and the stone used for other building projects through the town. At one time the abbey and its related buildings was the largest in Christian Europe. What we can see today, represents only about 8%of the total size of the Abbey. Cluny also became known as an equestrian centre due to Napoleon choosing this site for his national horse breeding programme. Many equestrian events occur here during the summer.

And, of course, we were in Burgundy so what better place to do a spot of wine tasting. On the way back to the boat we called into a family winery, had some very generous tastings and bought a few cartons as well.