The barge rally was done and dusted so it was time to "get on the road" again and complete the circuit of the central French canals. We wouldn't be doing the Nivernais as we had concerns about bridge heights and water levels.
So it was back along the Yonne revisiting some of the places we had stopped at before. Once we passed Migennes, however, we were in new territory. As we pulled into the mooring at Laroche St Cydroine we saw a narrow boat heading our way from down river. Lo and behold it was Quaintrelle, who we had first encountered after the Pouilly tunnel. They were having troubles with the hydraulics on their bowthruster so were heading back to the boat yard. We had met up with them at various points and now Aileen quipped that they were turning up like a "bad penny". After spending the night here we continued down river while they heading back up. Joigny was our next port of call and we arrived in time for the Fete de la musique. This usually means free concerts and/or impromptu busking by local musicians. It was a stinking hot day and the night was quite balmy, however, the music wasn't as interesting as some other places we have been. We were in for a spectacular sunset though.We stayed in Joigny for a couple of days, hoping for some cooler weather, before we headed on down to Sens. As we headed to the Quay we couldn't believe our eyes. Moored up was Quaintrelle - how did they get here before us when last we saw them they were heading in the opposite direction. Apparently while we were hiding from the heat in Joigny they had managed to pass us but they were still having problems with their bowthruster. There was  an hydraulic specialist in Sens so they were hoping for it to be fixed this time.

Sens is a cathedral town and has a rich history based around a Roman city built in the first century BC. The museum, attached to the cathedral, has some amazing examples of Roman artifacts and mosaics. There was even an excavation site in the crypt area. We also visited the covered market hall which has a good array of fresh produce.
Once again we said goodbye to Aileen and Mike as they now thought their hydraulics were fixed and they had booked into Arsenal Marina in Paris so needed to get a wriggle on if they were going to be there in time. We stayed a few hours more before heading off to Pont sur Yonne, to find Quaintrelle there ahead of us. They were still having problems but this time the mechanic was going to come to them. As we anticipated that this would definitely be our last time together we decided to walk into town for a drink at a local bar. But before we could do that, the heavens opened up so we settled for drinks in our wheelhouse.

Next morning three of us, including a small cruiser, headed towards the first of our locks for the day. The locks on the Yonne river are different to any others in France - they have sloping sides which means as you go down in the lock you could become stuck on the wall if your ropes are too tight. In some cases, as in this lock, there is a small floating pontoon so that smaller boats can tie up without needing to worrying about getting stuck on the sloping walls. As we were the biggest barge we tied up to the floating pontoon and the others arranged themselves alongside us. Easy!! We descended the lock quite slowly and safely. Onto the next and last three on the Yonne. We knew these didn't have any floating pontoons so Kevin and I had decided not to tie any ropes as we had already experienced being caught on the sloping wall in a previous lock a few days ago. So we hovered at the back of the lock. The cruisers gave their ropes to the lock keeper and held them loosely and also used poles to keep them off the sides. Mike and Aileen in Quaintrelle decided to loop one rope over a bollard while poling front and back. As the water started to recede Quaintrelle got caught on the wall at the rear and started to list really badly. Aileen screamed for the lock keeper to halt the water flow which he did and then helped them to push their back end off. All turned out OK but everyone was a little tense when we approached the next lock. So Aileen and Mike decide to follow our example and hover backwards and forwards as the water receded. Needless to say we were all rather relieved to get out of the final lock with Aileen declaring that she never wanted to see another lock again.
We were now on the Seine River and soon turned off for the Loing River, the start of the Loing, Briare, Loire canal system. We finally waved goodbye to Quaintrelle as they made their way up the Seine to Paris. We fully expect to see Mike and Aileen again but I think next time it will be in the SW of France, somewhere near Bordeaux.
Posted by shell007 at 3:48 AM No comments:


We chose to cruise to Burgundy this year so that we could attend our first barge rally. This year was particularly significant as it is the 25th anniversary of  the formation of the Dutch Barge Association. Auxerre was the destination and what a lovely town it is. It probably has some of the best examples of medieval architecture in France, and with its position above the Yonne River, it is a memorable place to visit. Auxerre is situated in the heart of the wine growing region most noted for its Chablis. We arrived a week before the rally to give us plenty of time to explore and familiarise ourselves with the town.


The rally was actually on the Nivernais Canal a short walk out of the centre of Auxerre. We were one of thirty one boats, mostly barges, that gathered at Parc Arbre Sec to participate in 3 days of organised activities. If these boats were moored end to end they would have covered nearly 800m so many were rafted and at times they were three deep.


On the first night Brad and Nancy from Libellule hosted the "get to know you" drinks party. Apparently at one stage there were 76 people on board so it was imperative that they were evenly dispersed throughout the boat rather than congregating around the food and drinks.


Our first organised activity was a wine tour, wine tasting, visit to St Bris church and a luncheon at the mairie in St Bris. The wine tour was through the Chablis vineyards with an explanation of the 4 different categories from Petit Chablis all the way through to Grand Cru. As there is only 100 hectares of these Grand cru vines they are obviously the most expensive in the region and highly sought after by local vignerons.


Our wine tasting was conducted at Domaine Bersan by the 21st generation of vigneron. We tried 4 different wines matched with 4 different snacks and were then given a tour of the cellars by the patriarch of the family. These cellars have existed for centuries but, during WWII, were connected so that the townsfolk could walk safely underground to the church. After the war they were blocked up again but as the Bersan family has accumulated properties in the town for family members they have been interconnected again to store their wines. 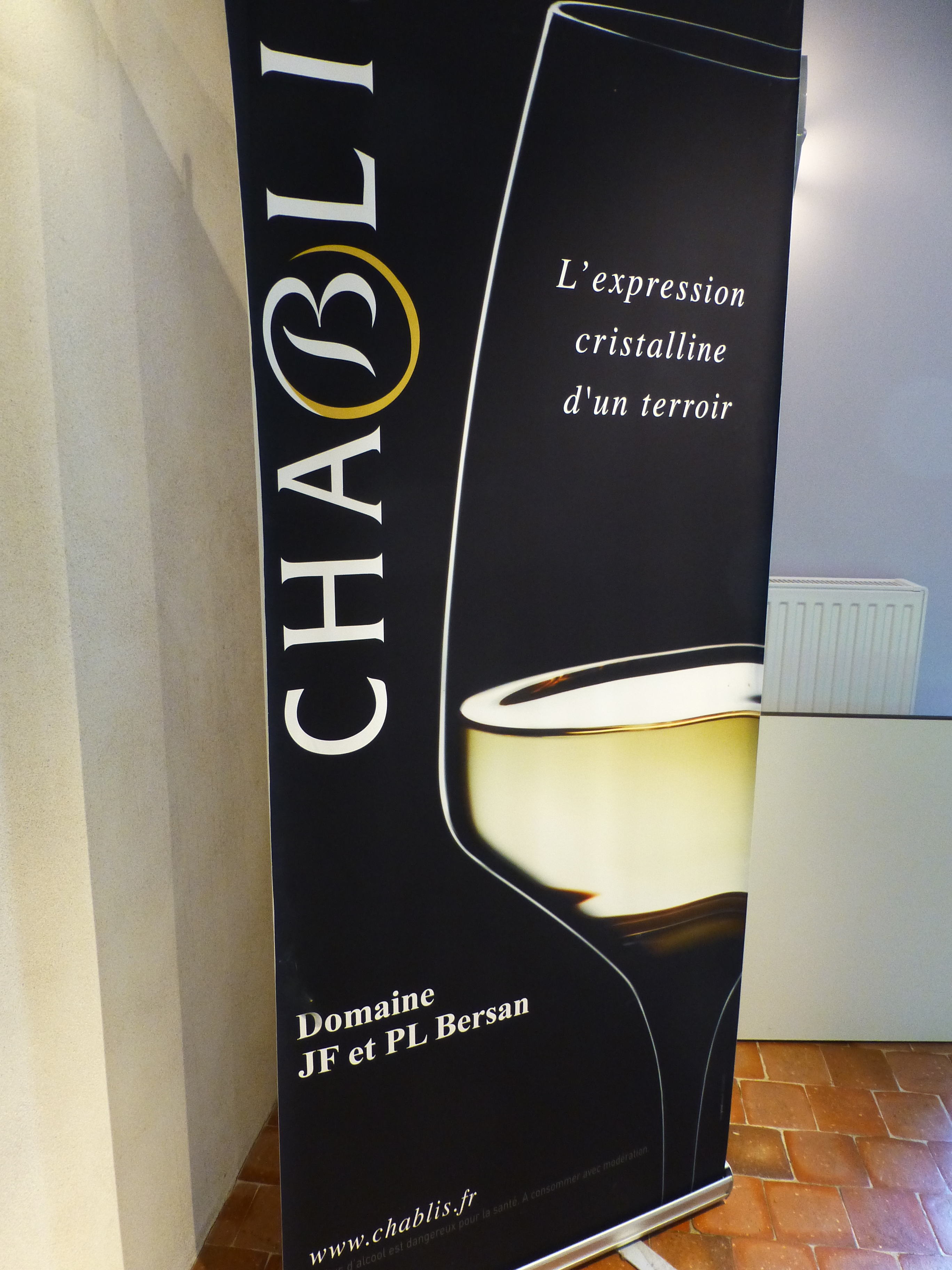 After the wine tasting we were given a guided tour of the Church of Saint Prix  and St Cot. For such a small village the church seemed to have a number of historical artifacts and interesting paintings.


After our tour of the church we were treated to a lovely lunch in the Salle des Fetes of the local Mairie, housed in the old chateau.
Posted by shell007 at 3:44 PM No comments:

On day 2 a walking tour of Auxerre had been organised but as we had already done our own self guided tour we skipped that so that we would be better prepared for the afternoon's boules competition. With so many people keen to take part, the rules became quite fluid, otherwise we would have been playing long into the night. By the end of the afternoon my partner and I had been eliminated but Kevin was into the final day and the quarterfinals.

Some of the teams in the preliminary rounds

A nice shady spot to wait for your turn[/caption]

Once the preliminary rounds of the boules competition were over it was time to get spiffed up for the champagne reception and dinner at the local sports club. Apparently a famous soccer player, whose name escapes me, used to train here.
The mayor of Auxerre made us very welcome and hoped that the DBA rally would happen here every second year. The canapés were amazing with edible spoons and an interesting take on a Vietnamese spring roll with it all held together by a very small peg. We then all crowded out onto the grandstand for the obligatory group photo before heading back into the dining room for an impressive dinner. During the speeches a special award was given out to the owners of the barge Viator who managed to get to the rally despite having their wheelhouse demolished by a Dutch bridge operator.
[caption id="attachment_media-32" align="alignnone" width="4320"] 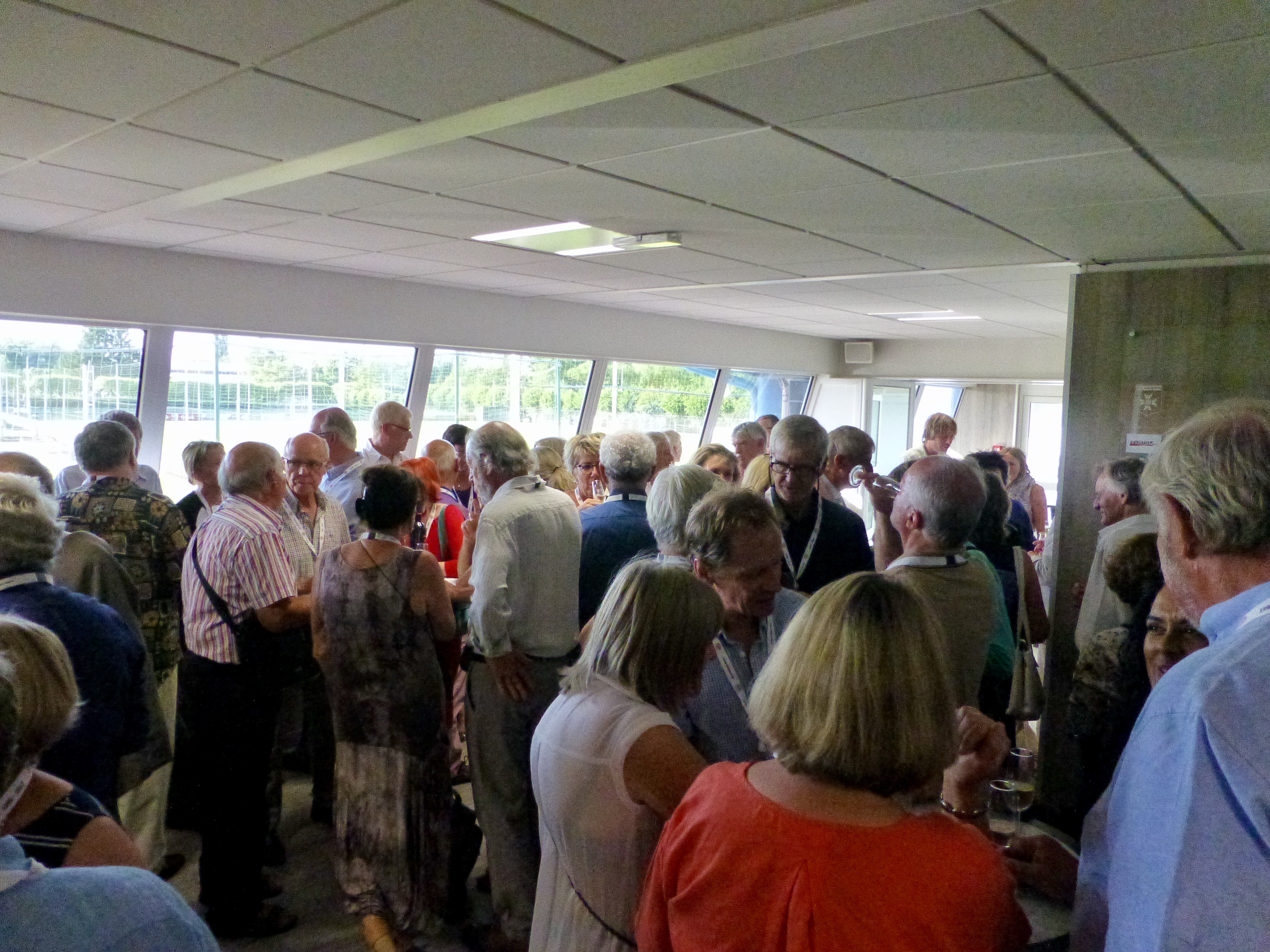 The dessert went down a treat during the speeches[/caption]

Not too early on the morning of our final day (compensating for those who had partied late the night before) was a Man overboard talk giving valuable information to those new and not so new to boating about how to prevent an accident from happening and, if it did, how to get the person safely back on board.
[caption id="attachment_527" align="alignnone" width="4320"]

Prior to lunch in the park, some people took part in a rowing race. Dinghies and boats of all shapes and sizes took part with the more professional participants being put under a time penalty.
[caption id="attachment_533" align="alignnone" width="3659"] 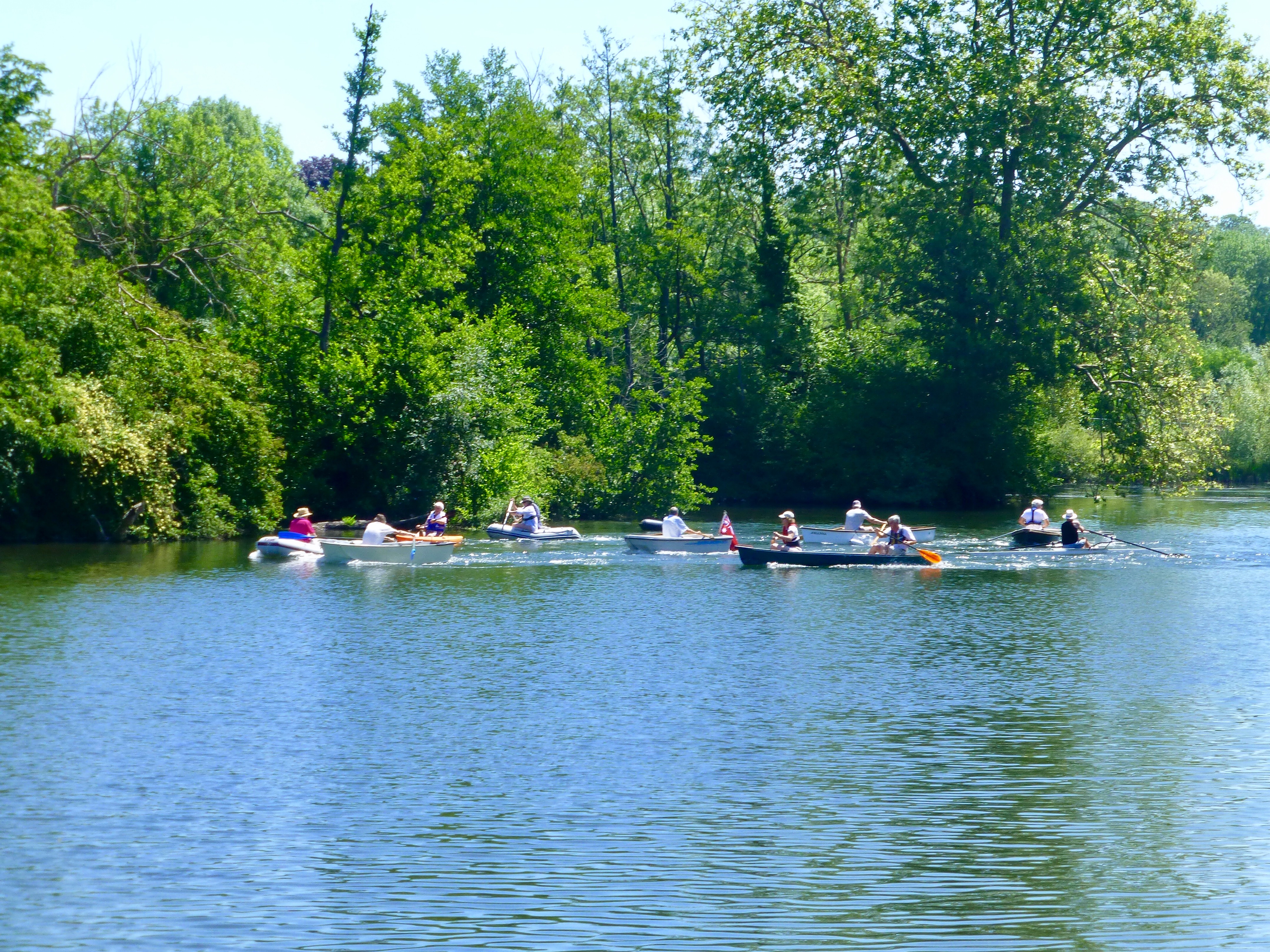 The afternoon brought the quarterfinals and semi finals of the boules competition. Kevin and his partner Poll were still in it and would play out the final prior to the BBQ at the marina in the evening.
[caption id="attachment_535" align="alignnone" width="4320"]

You know it's serious when the tape measure comes out[/caption] 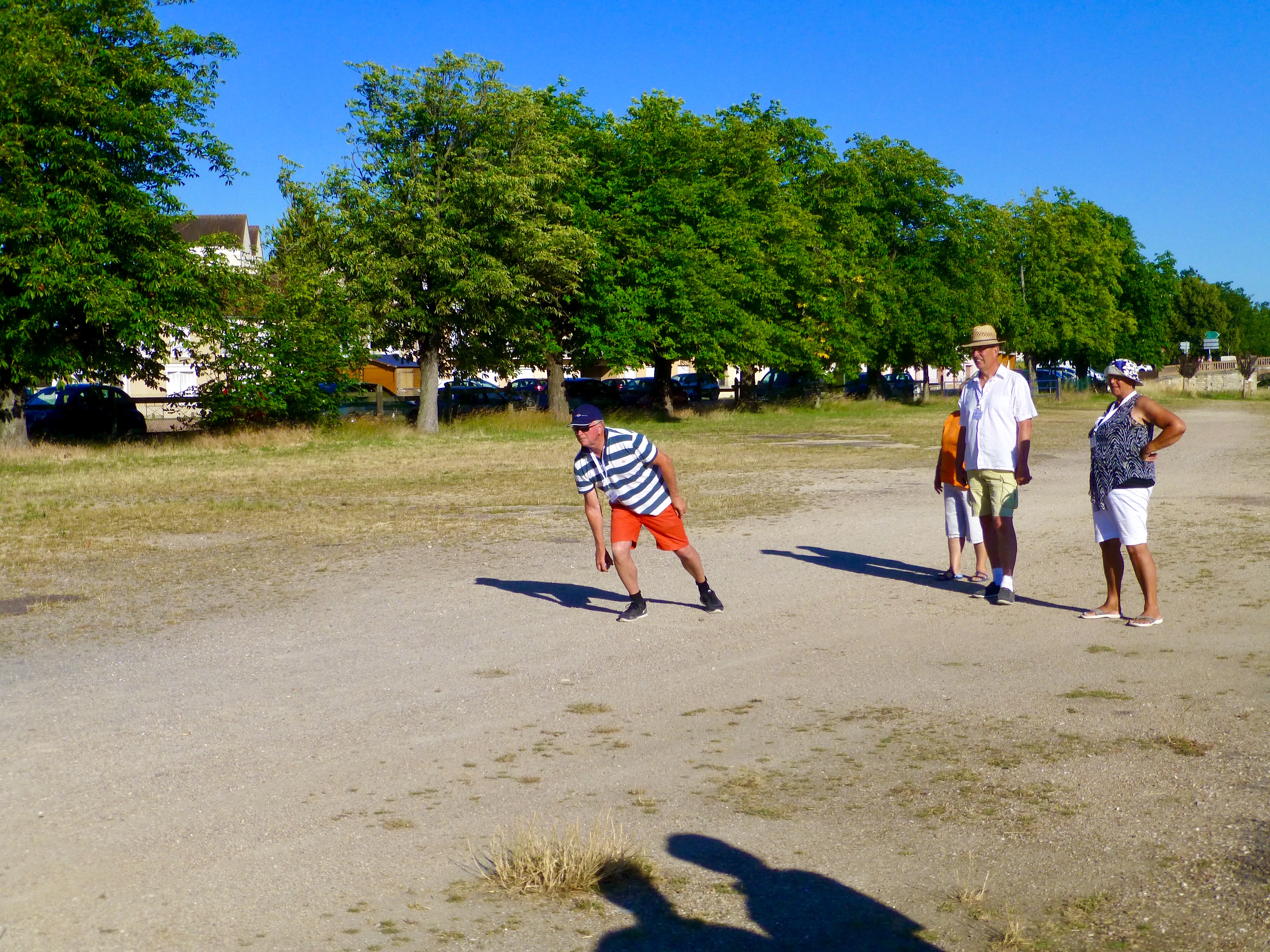 While everyone was sheltering under the shade of the trees at Aquarelle marina, the final of the boules competition was being keenly contested. Kevin and Poll finally succumbed in the closing rounds of the match but it was close and enjoyed by all participants.
[caption id="attachment_558" align="alignnone" width="3590"]

And at the end of the evening we wandered back to the boat, reflecting on what a great rally it was and the new friends we had made.
[caption id="attachment_559" align="alignnone" width="4320"]

Sunset in Auxerre on our final evening[/caption]
Posted by shell007 at 3:43 PM No comments: